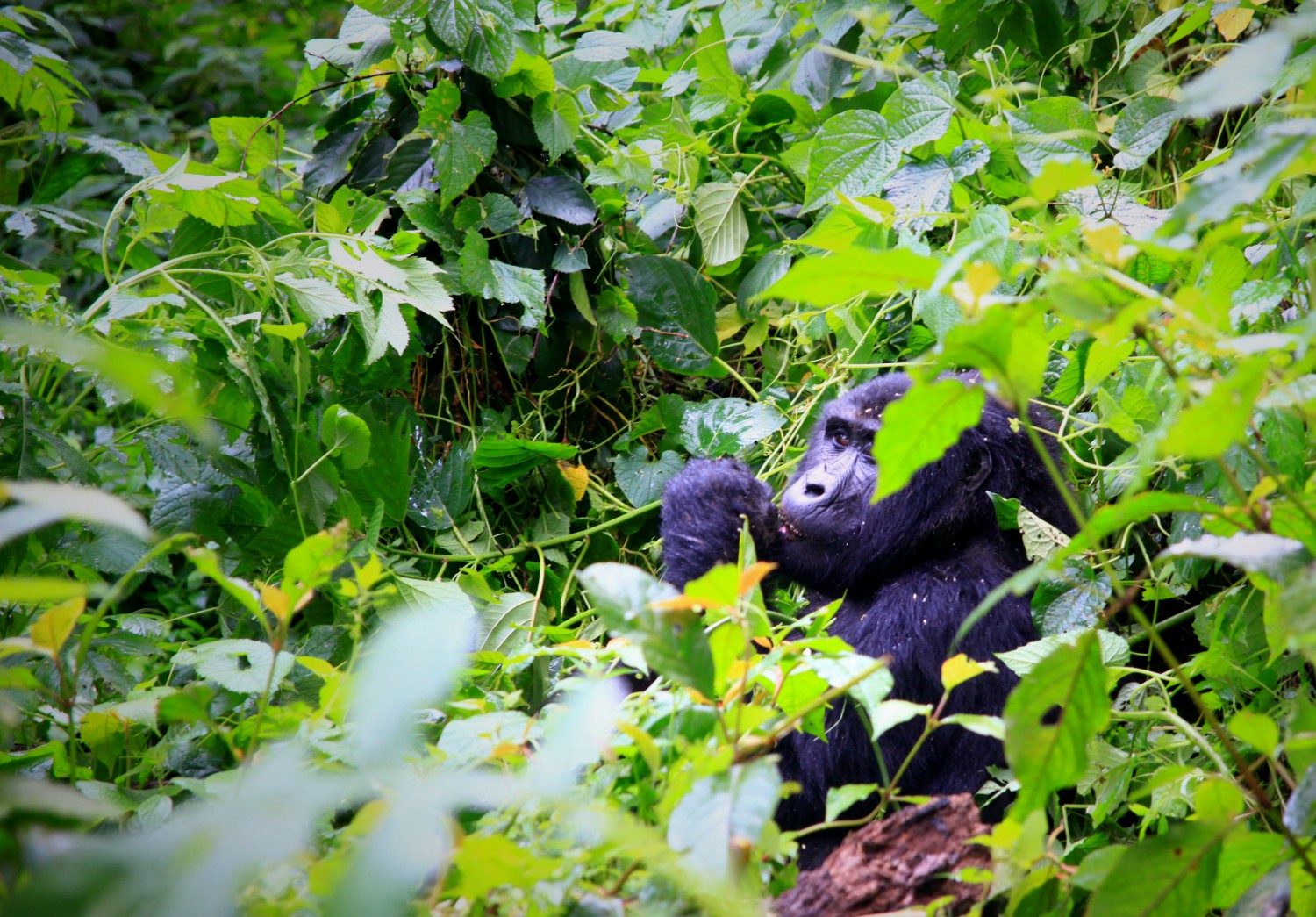 I have a confession. I am about to embark on a blogging trip with Nomad Adventures to go off to Uganda and trek for Gorillas in the mountains. It’s an unbelievable trip, but this is not my first encounter with a Gorilla. A long, long time ago, back in the thick of 2007, you remember 2007 right? When Amy Winehouse’s song “rehab” came out, the housing bubble burst for the first time in the sates, Harry Potter books ended and Justin Timberlake and Cameron Dias broke up. Yup, I didn’t remember that either, but moving on. Pic (NomadAdventureTours)

In a jungle around 2 356 km west from Uganda, I was planting my feet as a very green, very inexperienced traveller heading out to central Africa for the first time. Cutting my conservation teeth in Gabon I had my first Gorilla encounter while doing a nine-hour transect through the jungle near the Congo border.

Basically there was Quevain, Pappa, my then boyfriend now hubby Mike and myself trooping through a track in-between massive amounts of foliage. It was hotter than hades and all we had between some very serious wildlife and us were big shoes and sticks. Also a briefing that if we encounter a Gorilla we had to drop onto the ground, don’t run and lower our eyes. Jungle elephants? Run like hell in different directions. Fine, no problems.

After slogging around for a whole day through sharp brush, swampy waters pols and exquisite open grassy plains I had abandoned all hope of seeing any Gorillas, until we were just over a ridge about to hit the last two km before base camp. Suddenly Quevain stopped mid stride, swiveled on his feet and glared into the side of the jungle on our right.

We all froze, straining to every chirp and creak.

In a few seconds all four of us were dashing into the low bushes. You could hear the very distinct sounds of animals crunching the forest floor as they moved. As quickly as we found the source of the noise, out of nowhere a massive section of the undergrowth started to rumble and rattle like an earthquake. The male, screaming blue murder, started hurtling towards us, snapping very thick branches and tossing pretty much everything in his path.

My heart was pounding so hard I really thought it was seconds away from bursting. We all dropped into the ground, and I shakily tried to pretend to over examine some leaves I had gripped in my hands.

I have never NOT wanted to see a gorilla in all my life.

That deep, sharp bark ran straight through my insides, much the same way you feel when a male lion roars right next to you at night. It’s both exhilarating and completely unnerving. Needless to say after giving us a good telling off the Gorilla troupe melted into the jungle and by the time I had the nerve to look up I had missed the fleeting sight of them. The encounter lasted all of 30 seconds, so you see I have technically seen a Gorilla, but not really as well as I would have liked. Which is what makes this trip so special for me.

This time I am ready, in fact you might dare to venture that since my first journey into the world of travel I have become somewhat of a dedicated researcher before I head off anywhere. Maybe it’s the history nerd in me, but I love nothing more than to spend hours and hours getting stuck into articles, books, music, tv programs and pretty much anything I can get my hands on when it comes to an area. I became addicted to Nigeria’s soapy ‘Fortunes’ for months with this approach, much too my husbands tv watching dismay. For me it’s the vital mental pictures I build up when I leave my home comforts.

Some travellers love to just hit the road, to let experiences unravel in front of them as they go or to not have any prepositions created in their minds before they hit the tarmac. But I personally don’t find that an exiting way to travel. I want to know where my feet are falling. With each step I want to know who has walked this road before me, what wars, what lives, what history was written here? I want to know what currently inspires the poetry, the novels, the music and the art of Ugandans at the top of their respective fields living in and outside of the country. Uganda isn’t just a world of African sunsets sinking into lush green vegetation with various animals munching things in the foreground.

The Gorillas are a major attraction for foreigners, but they are just one part of an ecosystem that makes up the landscape of Uganda, politically, environmentally, socially and culturally. I can only hope that I am granted a brief access into a part of Uganda that I have been pouring over on and offline. Because with this tour Gorilla trekking is creating the baseline for why we are travelling but I know there will be so much more than that, if I am open to it-and boy am I exited.

And I also hope I don’t become a real life “did you know that….” for the rest of the group or get stuck headfirst in the jungle brush, quivering like a fool-again.

You can follow along with the adventure either on Twitter/Facebook

A nice way to be kept up to date with all things going on in the 10 National Parks, 12 Wildlife Reserves and 14 Wildlife Sanctuaries of Uganda

An incredibly talented Photojournalist for Reuters and the Observer Edwards pictures have changed the Ugandan thinking about photography, and it’s not hard to see why when you look at his beautifully crafted photo essays of issues in Uganda.

She is a blogger, a WEF 2013 Young Global Leader and a multimedia journalist working on peace and conflict issues in the Eastern Africa region. Incredibly sophisticated and intelligent this is a blog to get you thinking above and beyond which is probably why she won the Waxal - Blogging Africa Awards in 2009.

Who doesn’t love a bit of glamour and gossip? Grace runs the popular fashion, music and gossip blog that apparently is super trend setting in Uganda.

An independent online journalist and blogger based in Kampala and also host at 99.6FMJ. He also writes for the Independent Magazine. Good if you are more of a radio kind of person.

Charlotte seems to be the go to expat blog in Uganda. Called ‘Dairy of a Muzungu’ it is filled with a wealth of information about wildlife, travel and all things that a visiting person might want to have answered hen it comes to Uganda.

With his first blog being hacked and shut down by the Uganda government, this outspoken Museveni critic has become a very famous voice in Ugandan political debate and discussions.

The official twitter handle for the Uganda Tourism Board. Get travel articles, wildlife, nature and a dash of culture of the country.

A blog titled ‘Lies, treachery and sundry deceits’ Ernest has gathered a massive following when it comes to his quick witted, hilarious take on all things Ugandan and International from rap music to potholes and politics. I spent hours on this blog, it’s wonderful, just like his bio: ‘He does not approve of gangsta rap music, but will not complain if you keep the volume low. He thanks you.

And the awesome people making it possible for me: