Another year has passed and what a busy one it was for all of us at Moving Sushi. 2014 saw I take on a massive amount of flights across East Africa, Mike continuing his work with Smartfish and myself contracted off to various freelance assignments. It was great luck that on two occasions our work collided and we actually got to spend some time in another country with each other instead of  passing like ships in departure lounges. I think the phrase is "ships in the night?'-whatever it is , I am hoping that 2015 will see us do a lot more work together or at least have one of us travelling  with the other even if it is to just hold the camera bag and keep the batteries charged.

There were a few blog posts from last year that we did not get out in time in 2014, christmas saw everyone running around like mad people trying to wrap up lots of home administration before 2015 hit, so watch out for them coming through this and next month. But happy to say that we are back on track and have lined up some exiting things for 2015, including a trip to New York to attend the international Explorers Club dinner. One exiting thing (aside from getting to go to New York of course) is that at the dinner Dr Neil deGrasse Tyson , of the series Cosmos, will be receiving an award- and my sole mission for the night is to try and stalk him to get a selfie with him. It's also a black tie affair so there is mild panic over what on earth we are going to wear considering that our clothes consist of board shorts and flip flops most of the time. Either way if anyone knows of some exiting things or must not miss sights ,food and sounds that we should take note of while in the big apple then do get hold of us on twitter or facebook and send us any suggestions or cool contacts.

Another exiting thing for us this year was getting a write up in Africa Geographic on our last expedition along the East Coast of Africa doing a coral reef survey -find the link here . Also if anyone is interested there was an article out in National Geographic in December ( 'Walking into the Hold Lands' edition ) which featured an article on South Africa and ideas on how we should keep our seas healthy as well as look after the interests of the fishing communities that depend on fisheries to survive. Great photography from Thomas P. Peschak , but as far as the article goes it falls a bit short when actually looking at the fishing communities on our country. We were amazed that they included nothing on the small scale fisheries laws that have been put in place to attempt to deal with that exact issue of sustainably managing local fisheries, nor was there any interviews conducted from a governmental side. It was a very nice article, well written but I could not help but feel like the issues raised in the article pretty much felt like the same old story over and over again. We all are pretty aware at this point in time that we need MPA's , governmental backing and local buy in and support to be able to have some shot at sustainably using our ocean resources, but there was no details of the kind of work that is actually happening to get this going , and there is plenty of it happening in South Africa. Take a look if you can and send us your thoughts on the article. 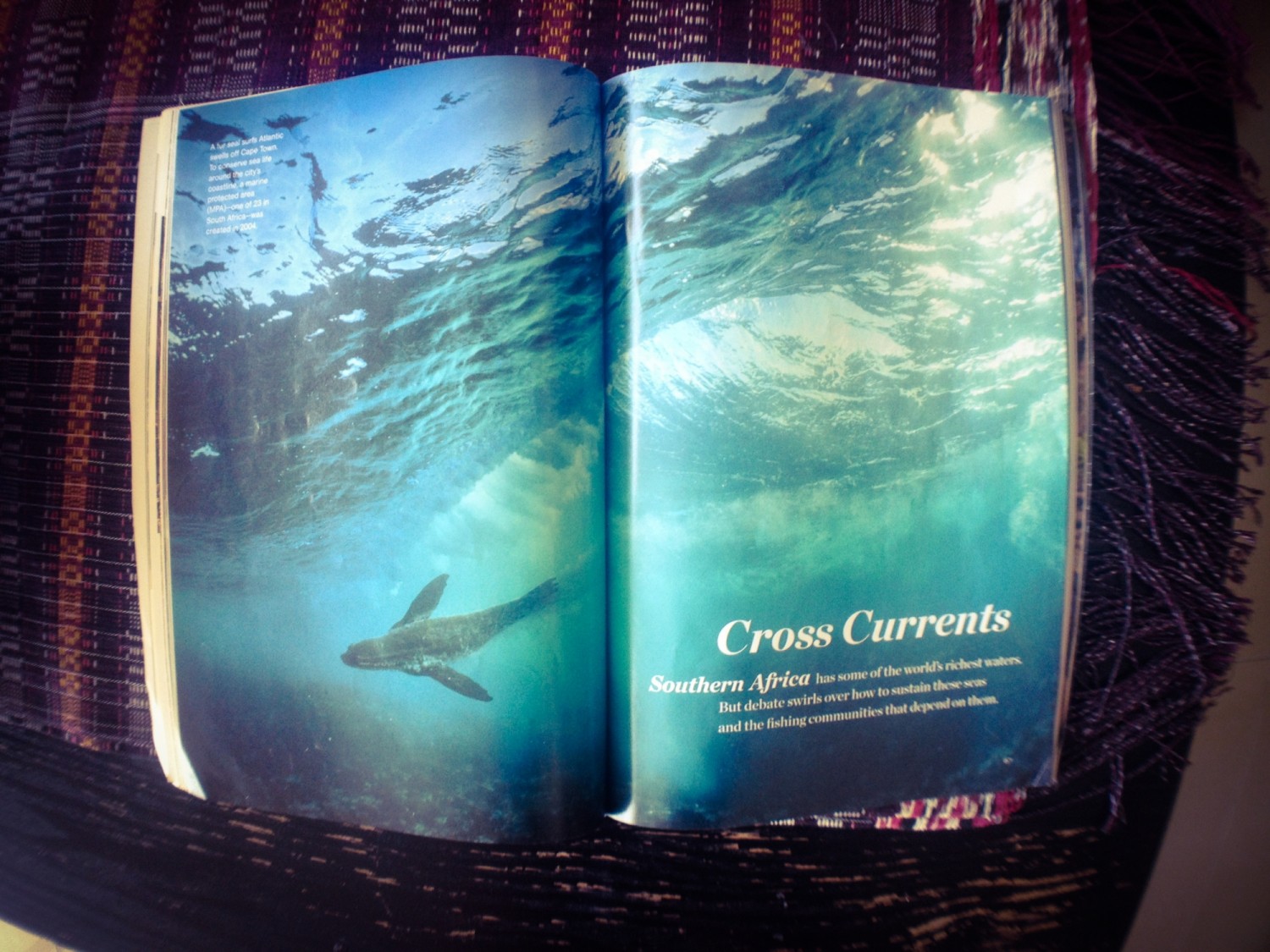 Another little gift we received fro X-mas was this rather nifty book called Starfish by Daisy Jones. The author has taken 10 sustainable fish form the SASSI green list including locally farmed oysters,rainbow trout,mussels and dusky kabeljou and anchovies, squid, snoek, hake, yellowtail and sardines. What I liked about her take on doing fish sustainably is that before each section she really goes deep into detail on the sustainability of the species and the history of the industry around it. A very interesting read and when it comes to giving people some guidance for how to be able to think a bit more concisely on what they eat and why (well those that can afford to consider what they eat of course -it's a lot more complicated for people where food security trumps food choice)  and this is a good step in the right direction. Last year we also sat down to dinner with a very talented young chef in Cape Town who is trying to create a path to providing better sustainable fish choices at a high end level in a restaurant as opposed to just providing the most expensive or unsustainable fish species because it's popular. The interview will be coming up this month on the blog- so keep an eye out for that.

We hope that your 2015 year is going to be sustainable, productive and filled with exiting adventures. See you in the water.